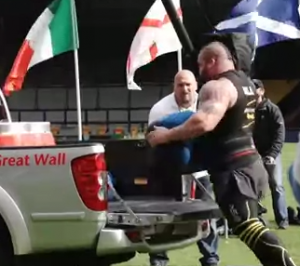 The twelve competitors completed six disciplines which included carrying, flipping and lifting loads of up to 410 kg.  The prize for the winner was a Great Wall V240 ute – the most affordable 4×4 double cab ute in the UK.

Showing awesome strength competitors pulled trucks, carried motor bikes and stones, lifted cars and logs, flipped tyres and recreated the ‘Pillars of Hercules’ legend.  At least one of these challenges included the Great Wall V240 ute as the star.

The incredible feats of strength performed by the worlds strongest men should not be emulated by ordinary people said Paul Hegarty the Managing Director of Great Wall UK – our new V240 ute has the qualities of strength, muscle power and robustness which these amazing men display and is a fitting prize for such an athlete.

The V240 ute matches the charisma of the competitors with a chunky look, strongly defined wheelarches and enhanced ground clearance for off-road use.  Engagement of the four wheel drive system can be made even when the vehicle is moving.  It has been built to make use of all these features and it’s strength to be the perfect load puller.

With the newly developed 16-valve turbocharged diesel 2.0-litre motor the V240 gives an impressive fuel economy (34.0 mpg combined) leading it’s class.  It can tow 750 kg with an unbraked trailer and 2,000 kg with a braked trailer and has a maximum 1,050 kg payload which makes it very competitive with current rivals.

The ‘Great Wall Promise’ has been adopted by all  dealers to give purchasers confidence in owning a V240 – this promise includes free service collection and delivery and service plans which are inflation-proof.  Together with this the V240 has a three-year or 60,000 mile mechanical warranty, a three year warranty on paint and six years on anti-perforation, it also comes with roadside assistance for three years.

Call Northland Autos on 09 438 7043 for more information on the remarkable V240 Ute which is on sale through the 44 nationwide hand-picked, newly appointed, Great Wall dealerships.