Great Wall about to launch in India 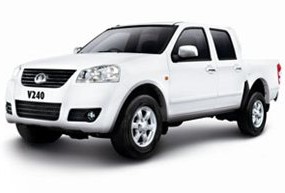 Chinese car maker Great Wall Motor Co is in discussions in India to have a plant there.  They would have no partner, which would be a first for a Chinese vehicle manufacturer.  In an interview, it was revealed by Vishnu Mathur (who is director general of a lobby group for the Society of Indian Automobile Manufacturers) that meetings have been arranged with government, suppliers and industry.

Great Wall is the eighth largest Chinese car maker and has pick up trucks and SUV’s in it’s line up both of which are exported to South Africa and Russia.  The next choice of country in the emerging market sector is India which has taken to the SUV market with enthusiasm as is shown by booming sales for the local industry.  A delegation of Great Wall executives met representatives of SIAM recently with the aim to commence manufacturing in India in 2016.  No comment was available from Great Wall.

Subsidies on diesel fuel have led to an increase in sales of 62 percent on passenger utility vehicles in the period April to November.  Car sales had only a 1.3 percent rise.

Already established Indian car makers Tata Motors and Mahindra and Mahindra will be the main competition.  However Fiat, the Italian vehicle maker, intends to launch their SUV Jeep late in 2013 (manufacture of this is controlled by Chrysler which is a USA subsidiary).  Ford, Toyota and General Motors have invested billions of dollars in Indian vehicle manufacturing but China has yet to make it’s mark in the industry.

Over the last eighteen months there has been a shrinking in car sales in India with fears that the industry may be producing too many vehicles with growth of three percent or less being expected for the 2012-2013 year ending in March.  SAIC Motor Corp of China reduced it’s holding in GM’s Indian manufacturing from 50 to 9 percent