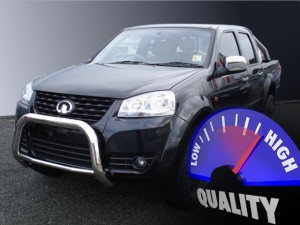 While many car companies are competing to get the top spot in New Zealand’s car industry, Great Wall Motors (GWM) has slowly and very recently invaded the country’s market with the extremely affordable V-Series utes, as this Great Wall V240 review shows.

In 2012 alone, GWM was able to sell combined units of around 620,000 cars all over the world marking a 28.3% increase in the company’s year-on-year sales. This increase inspired GWM to create better vehicles but with the same affordable cost for its emerging markets.

One vehicle that GWM boasts about having great performance at a terrific value is the 2013 Great Wall V240 Double Cab 2WD.

Features at an Extremely Affordable Price

The GWM V240 is an enhanced variant of an earlier version of V240. It is powered by a 2.4 litre 4 Cylinder DOHC engine and equipped with a long list of standard and value-added features such as leather trimmed seats, 16″ alloy wheels, dual front airbags, power steering, power windows and mirrors, an audio player, engine immobiliser, remote keyless entry, ABS, front and rear fog lamps, full factory 3-year warranty, and 3-year road assistance. The V240 specification is more than what you could ask for in a vehicle a price range of less than NZ$30,000.

A Surprising Revelation about the Design and Performance

There have been some surprising revelations about this ute provided by Great Wall reviews in NZ.

To begin with, GWM made a few changes in the overall appearance of the V240. There was an improvement with the rear bumper step and the nose which feels a lot sturdier than the previous versions. The interior is upholstered quite nicely with trimmed leather. Even the steering wheel is covered with leather skin to allow for a better grip. The V240 also comes with a new engine and gearbox to boost its performance. The overall design is visually pleasing.

Performance wise, the 2.4 litre engine delivers a modest power of 100kW at 5250 rpm and a maximum torque of 200Nm at 2500-3000 rpm with a manual transmission that has 5 gears. There’s a lag until the torques power up at around 1800 rpm. Though the power is a bit lower compared to similar double cab lines of other brands, a plus point for this ute is that it is relatively lighter than most dual cab vehicles. It performs well when loaded and runs quite smoothly off-road and on highways.

More importantly, GWM did not compromise the safety of its customers by adding two front airbags and an anti-lock breaking system to the V240’s standard specification. In some brands, you have to pay an additional amount to have these safety features installed in your vehicle.

Some people might be skeptical at the thought of owning a car that’s marked as China made. Nonetheless, China is breaking into the global market with high quiality products including motor vehicles from Great Wall Motors.

Great Wall Motors has a proven track record in creating impressive vehicles with  equally impressive performance and price. The company has developed a reputation for high quality car accessories and value-added features that most car companies are struggling to achieve until now.

The GWM manufactured V240 Double Cab 2WD, with its long list of valuable specifications that are not present in most utes, has become the consumers’ standard when choosing the right vehicle. The combination of affordability and performance is definitely something that will be imitated by car manufacturers wanting to break into New Zealand’s car industry. We hope that you’ve enjoyed this Great Wall V240 Review. If you have any questions or would like a test drive, please contact us.